Big Brother Naija Titans show has gotten a lot of people busy on social media as many random things happen in the Big Brother house.

The first housemate who fed the eyes of viewers was Khosi. Her left breast accidentally dropped out of her cloth while she rose a bit to adjust her bed. Khosi who was unconcerned was seen covering her breast slowly.

BBTitans Khosi is currently trending for revealing that she does not know where exactly her boyfriend lives in Nigeria.

While having a conversation with a fellow housemate, Blaqboi in the kitchen, the controversial housemate disclosed her eagerness to come to Nigeria.

Khosi shares that she will stay in her boyfriend’s house in Nigeria. Blaqboi asks where her boyfriend lives. She reveals she has no idea where he lives between Lagos and Abuja, but has now moved to Igboland.

Her reaction has set tongues wagging on social media, as many have opined that she’s telling tales.

See their conversation below;

Khosi: I’m coming to Nigeria for club appearances and I’ll stay in my boyfriend’s house…he has a house and a car

Blaqboi: Is it in Lagos or Abuja?

Khosi: I don’t know if it’s Lagos or Abuja but he stayed there before he moved to “igboland”…it’s between Lagos or Abuja…I really like Nigeria

Khosi: This is so embarassing, I know South Africans feel a type of way about that and it’s not good cause they won’t vote me

Sandra and Olivia, who slammed each other with unprinted words, had their first fight on Biggie’s show.

It all started when Biggie paired the housemates and instilled fear in the house; fear based on a joint consequence between paired parties.

Juicy Sandra partnered Theo while Jay was merged with Olivia; however, Sandra was concerned for some reason.

While she tried to wrap her head around the new system, Olivia’s persistent laughter triggered an outrage.

An argument ensued after efforts to make Olivia comport herself which skyrocketed into a full-blown fight where the duo almost exchanged blows.

Olivia threatened to mess up her colleague while raging at the top of her voice even though both were separated from throwing hands.

After the fight, Miracle advised Sandra not to get into a such heated exchange while reminding her that whatever she does will also affect her partner, Theo.

In his words; “Sandra don’t fight and if you want to fight go ahead but remember that what you are doing now is very selfish because it is not only your gain”.

“Theo is your partner, whatever you do reflects on him. Don’t fuck up his dreams because of just one moment. It’s not fair .”

Watch the video below …

The show is becoming increasingly interesting by the day, and viewers are thoroughly entertained. The latest development in the house has set tongues wagging, and our man, Juicy Jay, is involved.

A viral Instagram video shows Juicy Jay fondling the breast of his fellow housemate, Jenny O. Jenny O was seen in the video sitting on Juicy’s thighs in the lounge.

Juicy’s hand lands on Jenny’s breast, and instead of removing his hands, he decides to fondle.

Jenny, on the other hand, remains calms as though nothing had happened.

Jaypee, a BBTitans housemate, opens up to her colleague about being a sex addict and having uncontrollable desires.

Jaypee revealed this to Ebubu on Friday evening during a heart-to-heart about her desires.

This comes just days after a housemate condemned the idea of celibacy in the house, emphasizing how difficult it is for an adult.

In a chat with Ebubu, she said, “I’m a sex addict, my friends call me a nymphomaniac. I love sex. Since yesterday I’ve been losing my mind; I’m so ho•rny like I’m going crazy.”

Jaypee continued, “I’m that girl that guys meet & realise they don’t love s€x like I do; if I’m with you you’re gonna enjoy the benefit.”

Out of curiosity, Ebubu asked, “Out of the 5 people you are dating like do they know each other?”

She responded, “No they don’t, some know each other but they don’t know I am dating with the other.”

Big Brother Naija Titans housemate Khosi has gotten a lot of attention for her recent question to colleague housemate Yemi.

Khosi and Yemi, BBNaija Titans housemates, appear to be a couple of this season’s reality show as both serve viewers and fans with vibes.

Khosi and Yemi were caught on camera sharing their first kiss just 48 hours after the twenty housemates were introduced and ushered into the Big Brother house. On several occasions, the two have been seen all over each other.

It appears their relationship has grown stronger as Khosi has been caught on camera grabbing the joystick of Yemi as she quizzes him why it’s “hard”.

In response, Yemi who seemed to be short of words said that it’s always hard.

Watch the video below…

The Big Brother Nana, a housemate on Naija Titan, bore it all in a conversation about how she became a streeter, a dropout, and a bisexual.

Nana shared a heartbreaking story of how she had to drop out of school when she was in level 300 because of a lack of support from her family members.

According to her, her father always described her as a mistake and was forced to the street where she became pregnant and also bisexual.

The 22-year-old housemate while speaking to her other colleague housemates said;

“I was in the 300 level when I had to drop out. I cried a lot because of this. This made me go through a lot. I had to take care of myself.

I don’t owe my mum anything because I was in the street way too early, bringing things home, she never asked me how or where I got them from. My father has never been proud of me. Uttering a statement like I’m a mistake.”

“I was six months pregnant and didn’t know. I didn’t go for antenatal. The baby died and was decaying in me. My aunt took me to the hospital and lied that I had an infection. I was relaxed, my mom said I passed out five times. I don’t know how the doctors did it that my womb is still intact. I have to do a lot of dirty and nasty things because of my parents’ negligence. I dropped out from school in 300 level because there was no one to train me.”

“Because I want money I’ve met a lot of men in “different sizes”, so even if you’re what, I’ve met your size, so just do the f#ck and stand up.

Man I don’t enjoy sex, I don’t feel and it got fucked up when I had to start doing women, you know when I said I’m bisexual.”

Khosi and Yemi, BBTitans housemates, set tongues wagging when they shared a kiss in bed two days after the show premiered.

The reality stars hit it off right away and have been seen enjoying each other’s company since Day One.

After a period of chatting in their duvet, they decided to take their friendship to the next level by getting intimate.

They shared a kiss while lying in the same bed after which they continued their chat.

Watch the video below:

As certain conversations begin to fly, it appears that sexual tension is beginning to build up in the BBTitans household.

In the past, internet users have attacked housemates who engaged in sexual activity on camera, calling them “uncultured and shameless.”

Last night, Blaqboi and Japyee, another member of his house, were having a chat that had sex undertones. The viewers expecting them to refrain from having sex in the house worried Jaypee, a nurse.

She asserts that it is essentially difficult for adults to live in a home without having sex for three months.

On Sunday, January 15, the first cast members of the program entered the residence. The contestants, who are from South Africa and Nigeria, are there to battle for the $100,000 prize money.

James Brown, a well-known crossdresser, has responded as online users discuss their apparent similarities to Khosi from Big Brother Titans.

The BBTitans premiered in South Africa on January 15th, with housemates from Nigeria and the host country competing for the grand prize of $100,000.

It should be noted that the BBTitans is a combination of Big Brother Naija and Big Brother Mzansi from South Africa.

One housemate, Khosi from South Africa had drawn reactions as netizens point out her resemblance with the Nigerian crossdresser, James Brown.

See some of their reactions below;

James Brown has hastily set fans at ease as he assures them that they’re mistaken. 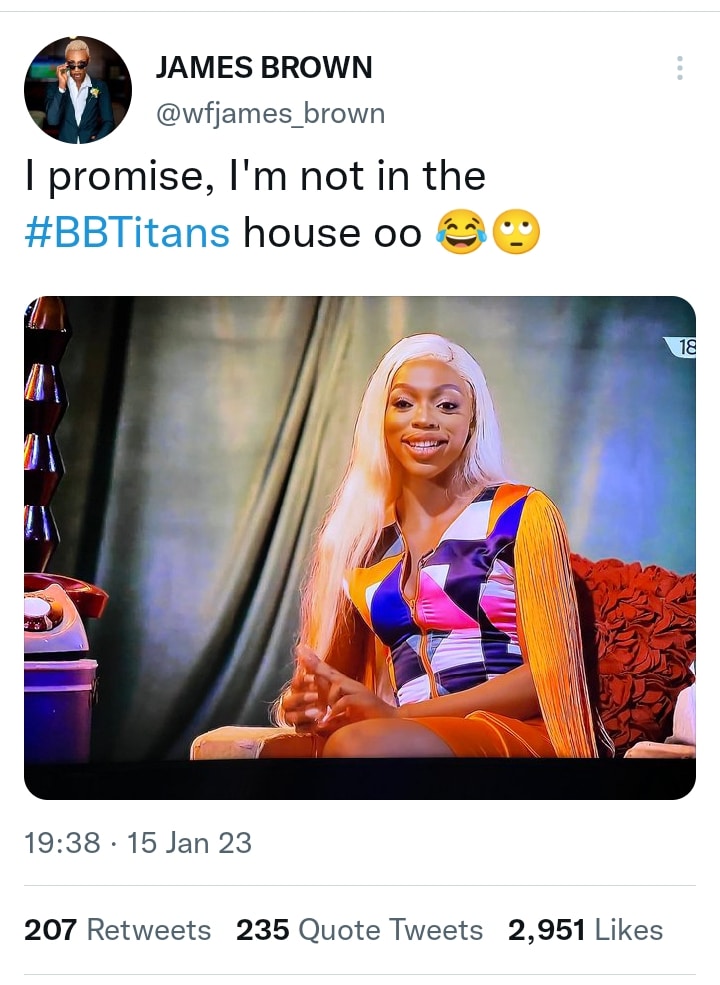