Internet users were outraged after seeing a video of alleged bank officials hiding new currencies behind piles of old ones.

In the video which surfaced online, officials could be seen instructing a young man at a bank vault being asked to bring down stacks of old naira notes.

SUGGESTION: You can get News updates directly on WhatsApp by clicking “HERE”.

As the video depicts, the new naira notes had evidently been hidden behind the old ones.

The officials could be heard in the video telling the man to load up their machines with the new naira notes.

Watch the video below;

The video has stirred mixed reactions from netizens many of whom have expressed disappointment.

jst_adaora wrote: “Who are they reserving it for ? The manager wan sell am??”

debozarakikenpachirich wrote: “We dont like ourselves in this country…we need a fundamental change of mindset” 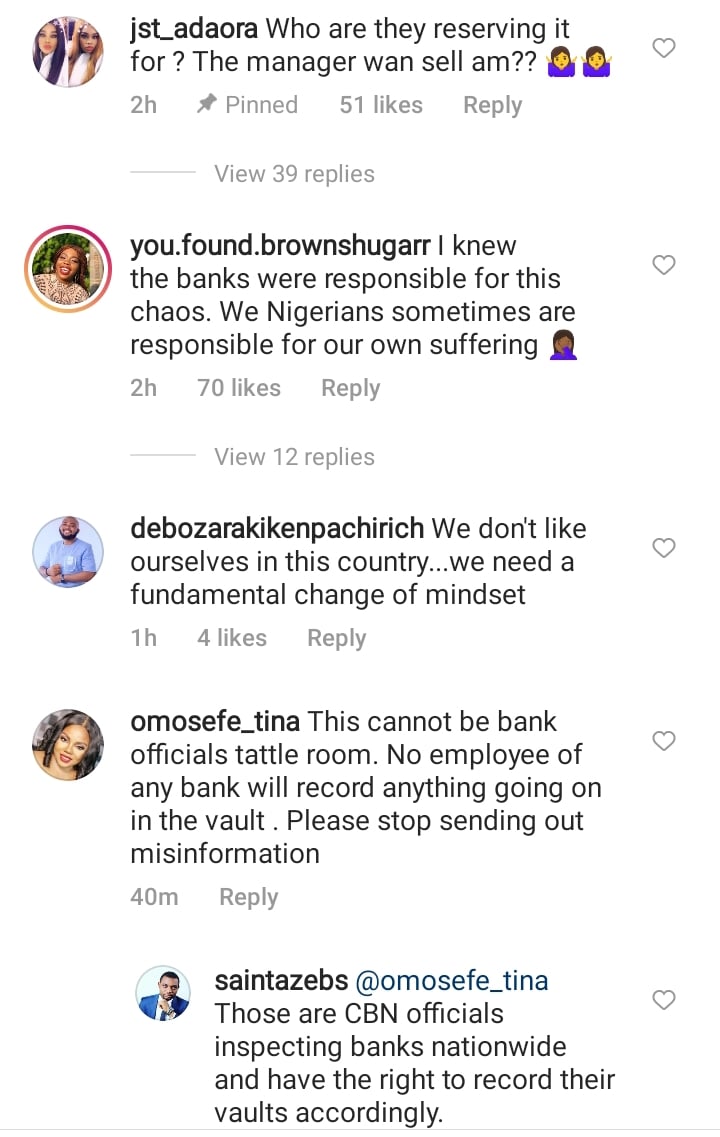 If Atiku Abubakar, the Peoples Democratic Party’s presidential candidate, loses the election, he has promised to accept it in good faith.

Speaking to BBC Pidgin, he stated that he would not be the first loser; hence he would accept his loss in good faith.

He went on to dismiss claims of corruption against him, emphasizing the fact that he has been investigated and nothing was discovered.

“All what I know, all corrupt practices or corruption allegations against me have been investigated in this country more than anybody else and nothing was found against me. That audio has disclosed nothing new.”

The Independent Petroleum Marketers Association of Nigeria has made a significant promise that petrol will be available and reasonably priced within 14 days.

This was disclosed by the IPMAN National Operations Controller, Mike Osatuyi, during an interview on Arise TV’s Morning Show on Wednesday, Febuary, 1 2023.

According to him, there would be the availability of fuel in two weeks’ time and all stakeholders have agreed to sell fuel at affordable prices to reduce the burden on Nigerians.

He said the Nigerian National Petroleum Company Limited and all other stakeholders across the downstream petroleum value chain met on Tuesday in their bid to end the crisis.

“Yesterday, there was a meeting in Abuja and the president of IPMAN was there and he gave me feedback on the meeting. So, I can say the NNPC is ready to find a solution to the crisis. They’ve now agreed that they will open more depots for IPMAN to be loading products through their platform at official price and this is what we have been clamouring for for years.

“From what I gathered now, they are given 14 days to clean up the mess. By the next two weeks, we should be able to buy at a very reasonable price. We must all work in the interest of Nigerians and let Nigerians benefit from this subsidy,” he said.

On the issue of smuggling, which the Nigerian Midstream and Downstream Petroleum Regulatory Authority had earlier said was a major cause of the fuel crisis, Osatuyi said all hands must be on deck to put an end to it.

He said the Nigeria Union of Petroleum and Natural Gas Workers must direct its members not to transport fuel trucks to neighbouring countries.

“When it comes to all the challenges causing the fuel crisis, you can’t rule out the bad eggs across all strata of the system. But at the same time, it takes everyone to say drop this nonsense and let us be born again,” Osatuyi added.

According to reports, the gunmen also attacked the Nnobi Police Station and a residential building within the station, located also in the same Council Area.

The hoodlums, armed with IEDs, petrol bombs, and other explosives invaded the facilities at about 1:45 am on Wednesday, February 1, 2023, in four unmarked Sienna vehicles.

Although, details of both attacks are still sketchy, however, a source said the hoodlums were repelled by the security operatives before they could carry out any dastardly act.

The source said that the gunmen, while shooting sporadically killed a 16-year-old boy, a relative of a serving policeman in the station, while the another victim, a 15-year-old female, sustained a gunshot injury and has been taken to the hospital where she is receiving treatment.

Confirming the incident, the Anambra State Police Public Relations Officer, PPRO, DSP Ikenga Tochukwu, said security had been reinforced in the areas, just as the situation is still being monitored.

According to Ikenga, “Anambra State Police Command today 1/2/2023 has reinforced security deployment in the state, following an attack on the INEC office in idemili South, Ojoto and Nnobi Police Station.

“The hoodlums came in their numbers by 1:45 am today 1/2/2023, with four unmarked Sienna vehicles, armed with IEDs, Petrol bombs and other explosives, invaded the INEC office, the Police Station and the residential building in the station.

“Unfortunately, one boy aged 16 years, a relative of a serving policeman in the station was murdered by the armed men, while the other, a female aged 15 years old sustained a gunshot injury. She has been taken to the hospital where she is receiving treatment.

“The situation is being monitored and further details shall be communicated, please.”

A boy who entered a shipping container during a game of hide-and-seek was discovered a week later in another country.

The boy was found in a different country a week after the hide-and-seek game with his friends.

The 15-year-old who hails from Bangladesh has been identified as Fahim. He said to have been playing with friends in the port city of Chittagong on January 11. Fahim hid inside the container and fell asleep, India Times reports.

Apparently, the container was then loaded on a commercial ship headed to Malaysia. This was where the boy was discovered in West Port.

Fahim was said to have fallen asleep only to wake up 2,000 miles away from home and in Malaysia. It turned out that he sailed with an Integra container ship across the Indian Ocean after he was mistakenly locked up.

However, officials said he had a fever and was taken to a nearby hospital for examination. Following an investigation, officials gave a report that the teen had wandered into the container. This was of course, during a game of hide-and-seek.

Nonetheless, the Police had initially suspected the boy had been entangled in a human trafficking scheme.

According to reports, popular businessman Ikechukwu Ogbonna, also known as IVD, has been remanded in Kirikiri prison.

Blogger Cutie Julls has shared an update on her Instagram page about the death of the late wife of IVD, Bimbo Ogbonna who passed on a few months ago.

According to the Instagram blogger, IVD appeared in court today, January 31st, 2023. He was accompanied by his lawyer and relationship expert turned friend, Blessing CEO.  IVD was reportedly charged with involuntary manslaughter by Lagos State following details leading to his wife, Bimbo’s death.

In her words, she wrote;

Lagos-based auto dealer, IVD has been just been remanded in Kirikiri prisons

Earlier today, IVD who appeared in court in the company of his lawyer and Blessing CEO was charged with involuntary manslaughter by Lagos State following the details leading to the demise of his wife, Bimbo Martins.

The CBN responded to pressure from concerned Nigerians following the disruption caused by the introduction of the redesigned currency.

This was announced in a statement by CBN Governor, Godwin Emefiele, on January 29th, 2023. The original deadline of January 31st, 2023, was set after the introduction of redesigned notes in December.

The extension has, however, been made to accommodate the collection of more old notes as there is a shortage of the redesigned notes currently in circulation.

The elders of the Lude community in Imo State have banished a brother and sister from the same family for allegedly practicing incest.

A video making rounds on social media captured the moment the siblings were escorted to the border of the town with a warning never to return.

The brother and his sister were said to be practising incest which goes against the laws of the land in their community.

The duo was escorted out of the neighbourhood by Akagu Security and set free to go anywhere they want far from their community’s reach and its environs.

Watch the video below …

Senator Ademola Adeleke has been removed as Governor of Osun State by an election petition tribunal.

Adeleke’s victory in the July 16, 2022, governorship election in Osun state was upturned by a three-man panel led by Justice Tertsea Kume on Friday, January 27.

This followed the admission of claims of over-voting in some polling units in the state. According to the tribunal, Adegboyega Oyetola, a former Governor of the state who was the All Progressives Congress candidate in the election, garnered 314,931 votes in the election against Adeleke’s 219,666 votes.

The majority judgement was split two to one. The Independent National Electoral Commission (INEC) has now been ordered to withdraw the Certificate of Return issued to Adeleke be withdrawn and issue another to Adegboyega Oyetola.

Chinenye Alozie, a phony Nigerian immigration consultant, was sentenced to two years in house arrest by a Canadian Provincial Court.

Chinenye Alozie was sentenced for being a fake immigration consultant in Canada. According to sources, he has been forging bank records, and documents to help would-be immigrants safely enter the country.

The father-of-4 pleaded guilty to acting as an unauthorized immigration consultant and to misrepresenting facts.

Chinenye Alozie has forged facts in immigration applications, and offences under the Immigration and Refugee Protection Act.

As stated by Canada Today reports, the court heard the crimes related to Alozie’s dealings with more than 60 foreigners. Most of them were students, between 2014 and 2019.

He caught the attention of the Canadian Border Services Agency in late 2018 after reports that he had advertised his services to overseas students online.

QC Matthew Sinclair told Judge Stacy Cawley at a hearing on Tuesday stated that “Alozie is not authorized to represent persons with regard to their applications.”